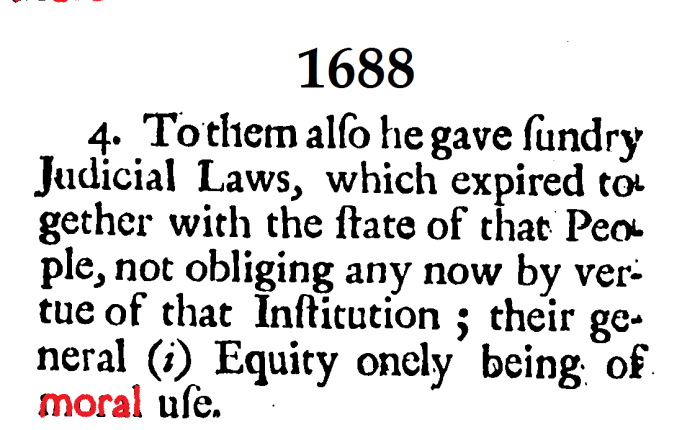 This is a public service announcement:

If you’re reading the Second London Baptist Confession of Faith and in 19.4 of your copy it says that the general equity of the Israelite judicial laws are of “modern” use, then you’re probably reading an edition copied from Charles Spurgeon’s 1855 reprint (found commonly in places like this). Putting aside the reasons for the change, you should know that “modern” is not the original reading. It should read “moral” instead of “modern.”

So if you’re going to make an argument from that wording, then appeal to Spurgeon and his reprint (if anything), but not any of the 17 (at least) editions of the confession that precede his.

***Update***: Judicious and impartial readers have pointed out that in places like this it is claimed that a 1742 edition of the confession used the word “modern” instead of moral. As I understand it, there are a few problems with this.

1. The confession was adopted by the Philadelphia association in 1742, but not published by them until 1743.

Every time you look at a hundred dollar bill, remember that the guy on it printed the confession of faith. For most of us, that won’t be very often.

2. The 1743 edition uses “moral,” just like the editions before and after it.

5. So, if there is a 1742 copy of the Philadelphia confession that is not on ECCO or anywhere else, and if it reads “modern” instead of “moral” in 19.4, then it would be a significant surprise to me. Not only would this copy break the consecutive chain of specifically labeled editions (second, third, fourth, etc), but it would also be strange that only one year later in 1743 the Philadelphia association reprinted the confession and reverted the wording to its original reading. Did Spurgeon make the change in 1855 for the first time, or is there a copy of the confession out there that reads “modern” in 19.4? It’s possible there is a copy I have missed. But even if that’s the case, you still have to deal with the copies listed above, which are original scans, not second-hand website copies. They all read “moral” as previously asserted.

21 thoughts on “Moral vs. Modern Use of the Judicial Law in the Confession of Faith”