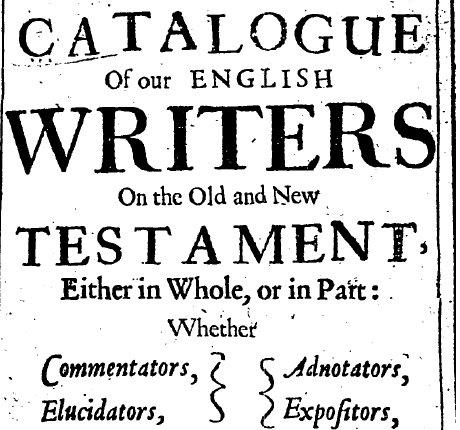 Some years ago when I was working on God without Passions: A Reader, I came across an extremely useful book published in 1662 entitled “AN EXACT COLLECTION OR CATALOGUE OF our ENGLISH WRITERS On the Old and New TESTAMENT, Either in Whole, or in Part: Whether Commentators, Elucidators, Adnotators, or Expositors, At large, or in Single Sermons.”

It is exactly what it claims to be. This book gives you sorted lists of English-language works (up to 1662) written on certain subjects:

If you’re studying a particular book, chapter, or verse of the Scriptures, this catalogue will help you find early-modern English-language resources for it. It will even tell you the year of publication. It is the same for subjects.

So, for example, when researching for God without Passions, I looked up works that dealt with catechetical principles because the doctrine of God is likely to show up there. I looked at expositions of the Lord’s Prayer, because they often explain who “Our Father” is and launch into the doctrine of God. I looked at expositions of the Apostle’s Creed because they likewise explain who the God in whom we believe is. So also, I chose certain texts of Scripture, like “repentance” texts or texts dealing with “Affections” and looked up who had written on those texts. The value of this resource was immense.

It’s a wonderful guide to a goldmine of historical wisdom. You can access an online version of it here. 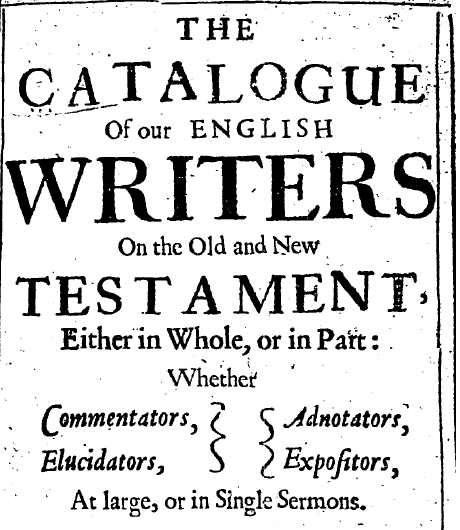