Many churches use or have used a catechism called “Keach’s Catechism.” Some call this “The Baptist Catechism.” Are they the same thing? Why is there a catechism called Keach’s catechism? Most of what follows is already contained in the introduction to the Baptist Catechism found in True Confessions by James Renihan. Instead of starting with the problem and working toward the solution, I’ll just build from the ground up to what I believe is the most accurate information on this issue.

The narrative of the London General Assembly that met in June 1693, contained in Ivimey, Vol 1, records that the GA commissioned William Collins to work on a catechism:

Ten months later, the Bristol General Assembly that met in April 1694, wrote to the London churches, asking them to make sure this project was completed. This is also from Ivimey, Vol 1. 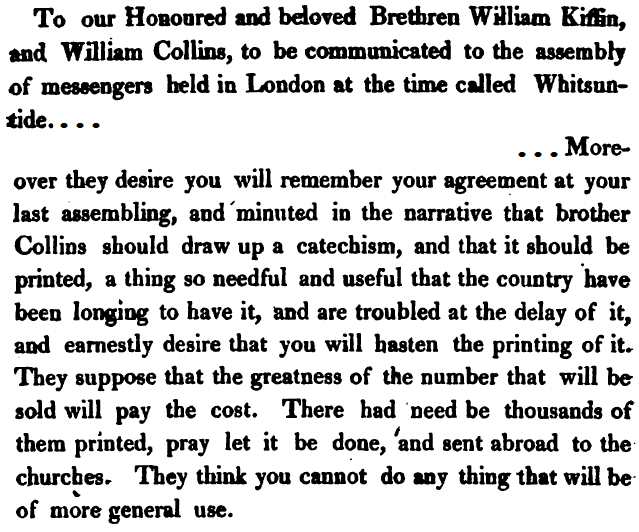 Correspondence between William Collins and Andrew Gifford in 1698 shows that Collins was managing the reception of funds and distribution of copies of the catechism. Collins wrote:

Bro Gifford
I rec[eive]d your lines and have since rec[eive]d the 6l-15s-0d [6 pounds, 15 shillings, 0 pence] from Mr Goddard, which you have got for the friends in Warwicke, and I have left with Mr Goddard 300 catechisms & have put in a dozen more which I present you with, & for the 300 I tooke but 24s, allowing 1s towards the carriage and when you have occasion for more, you may send to mee for there are some thousands remaineing of the last impression…

So, extant sources indicate that William Collins was the author/editor/manager of the Baptist Catechism. Jonathan Arnold’s excellent book on Benjamin Keach agrees that there is no solid argument for Keach’s authorship of the catechism. Arnold notes that Thomas Crosby did not list the catechism among Keach’s works. Why, and how, then, did Benjamin Keach come to be connected with the catechism? Ivimey was unsure. He wrote:

The earliest concrete evidence of a connection to Benjamin Keach dates to 1719 and the fourth printing of the Second London Baptist Confession of Faith (previously printed in 1677, 1688, and 1699). An advertisement in the 1719 edition states that William Collins and Benjamin Keach sold the rights to print the Confession and Catechism to John Marshall:

This should seem a bit strange because Collins died in 1702, and Keach in 1704. Why does this information appear in 1719, so long after Collins and Keach died? Well, compare the 1719 advertisement to a similar advertisement in 1700, contained in a second edition of John Bunyan’s The Heavenly Footman, printed by John Marshall.

This brings Benjamin Keach into the picture, but it still does not explain why he had a part in the printing rights to the Confession or Catechism. Nor does it explain why the Catechism came to bear his name.

In 1764, John Robinson printed the 16th edition of the catechism, in which he included, up front, a portrait of Benjamin Keach.

It is interesting that Robinson was from Horsleydown, Southwark. Perhaps he was a member of Keach’s church under John Gill? Robinson also printed Keach’s “Instructions for Children” in 1763. I don’t know what we can deduce from this, but the fact that Keach’s picture was affixed to the front of the catechism is at least some evidence of connections to Keach.

In 1794, the Catechism was again published, and here we see it “commonly called Keach’s Catechism.”

John Rippon succeeded John Gill at Keach’s church. Again, I am unsure of what we can draw from this other than to note that by 1794, the catechism was “commonly” called Keach’s. Why was it called that? There doesn’t seem to be evidence to substantiate any particular reason. The most the evidence seems to permit is the recognition that the catechism continued to be published by persons closely connected to Keach’s church and legacy, and that this connection is the best contextual explanation for the attachment of his name to the catechism.

We do not know:

In conclusion, in my opinion it is best to refer to the Catechism as The Baptist Catechism, since it was commissioned by the General Assembly and there is no evidence that Keach put it together.

As a bonus, here is the original “advertisement” that appeared at the end of the catechism, explaining why it was prepared and published.