This blog was originally intended to provide primary sources for those interested in reading them. This post will fit in with that purpose, focusing on translations and interpretations of Genesis 3:16b in seventeenth-century (and some late sixteenth-century) literature. The goal is simply to provide the data, arranged chronologically. I used this resource to track down expositions of this verse.

The first is the most difficult to read, so I will transcribe it. The rest can be read, with a little help.

Gervase Babington, Certaine plaine, briefe, and comfortable notes, vpon euery chapter of Genesis Gathered and layde downe for the good of them that are not able to vse better helps, and yet careful to read the word, and right hartily desirous to taste the sweet of it.
London: Printed by I. R[oberts] for Thomas Charde, 1596.
Page 41 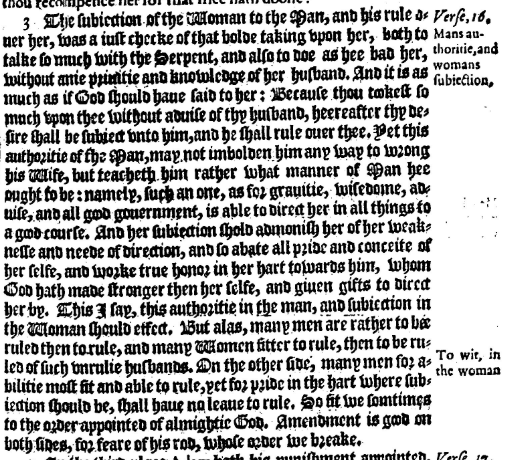 “The subjection of the woman to the man, and his rule over her, was a just check of that hold taken upon her, both to talk so much with the Serpent, and also to do as he bade her, without any privity and knowledge of her husband. And it is as much as if God should have said to her: “Because you took so much upon yourself without advice of thy husband, hereafter your desire shall be subject unto him, and he shall rule over you.” Yet this authority of the man, may not embolden him any way to wrong his wife, but teaches him rather what manner of man he ought to be: namely, such a one, as for gravity, wisdom, advice, and all good government, is able to direct her in all things to a good course. And her subjection should admonish her of her weakness and need of direction, and so abate all pride and conceit of herself, and work true honor in her heart towards him, whom God has made stronger than herself, and given gifts to direct her by. This I say, this authority in the man, and subjection in the woman should effect. But alas, many men are rather to be ruled than to rule, and many women fitter to rule, than to be ruled of such unruly husbands. On the other side, many men for ability most fit and able to rule, yet for pride in the heart where subjection should be [i.e., in the woman’s heart] shall have no leave to rule. So fit we sometimes to the order appointed of almighty God. Amendment is good on both sides, for fear of his rod, whose order we break.”

Nicholas Gibbons, Questions and disputations concerning the Holy Scripture wherein are contained, briefe, faithfull and sound expositions of the most difficult and hardest places: approued by the testimony of the Scriptures themselues; fully correspondent to the analogie of faith, and the consent of the Church of God; conferred with the iudgement of the fathers of the Church, and interpreters of the Scripture, nevv and old. Wherein also the euerlasting truth of the word of God, is freed from the errors and slaunders of atheists, papists, philosophers, and all heretikes. The first part of the first tome.
London: Imprinted by Felix Kyngston, 1602.
Page 154-155

Andrew Willet, Hexapla in Genesin: that is, A sixfold commentarie vpon Genesis wherein sixe seuerall translations, that is, the Septuagint, and the Chalde, two Latin, of Hierome and Tremellius, two English, the great Bible, and the Geneva edition are compared, where they differ, with the originall Hebrew, and Pagnine, and Montanus interlinearie interpretation: together with a sixfold vse of euery chapter, shewing 1. the method or argument, 2. the diuers readings, 3. the explanation of difficult questions and doubtfull places, 4. the places of doctrine, 5. places of confutation, 6. morall obseruations: wherein aboue a thousand theologicall questions are discussed … Diuided into tvvo tomes
Cambridge: Iohn Legat, 1605.
Page 51

Henry Ainsworth, Annotations Vpon The Five Bookes of Moses; The Booke of the Psalmes, And The Song of Songs, Or, Canticles
London: Printed for John Bellamie, 1627. (Ainsworth’s comments on Genesis were first published in 1616, I believe.)
Page 17

Arthur Jackson, A help for the understanding of the Holy Scripture intended chiefly for the assistance and information of those that use constantly every day to reade some part of the Bible, and would gladly alwayes understand what they read if they had some man to help them : the first part : containing certain short notes of exposition upon the five books of Moses, to wit Genesis, Exodus, Leviticus, Numbers, and Deuteronomie : wherein all such passages in the text are explained as were thought likely to be questioned by any reader of ordinary capacity
Cambridge: Printed by Roger Daniel.., 1643.
Page 12

Westminster Assembly Divines, Annotations Upon all the Books of the Old and New Testament
London: John Legatt and John Raworth, 1645

John Trapp, A clavis to the Bible. Or A new comment upon the Pentateuch: or five books of Moses. Wherein are 1. Difficult texts explained. 2. Controversies discussed. … 7. And the whole so intermixed with pertinent histories, as will yeeld both pleasure and profit to the judicious, pious reader.
London: Printed for Timothy Garthwait, 1649.
Pages 40-41

Benjamin Needler, Expository notes, with practical observations; towards the opening of the five first chapters of the first book of Moses called Genesis. Delivered by way of exposition in several lords-dayes exercises.
London: Printed by T.R. & E.M., 1654.
Page 106-107 (quoting John Trapp without attribution) 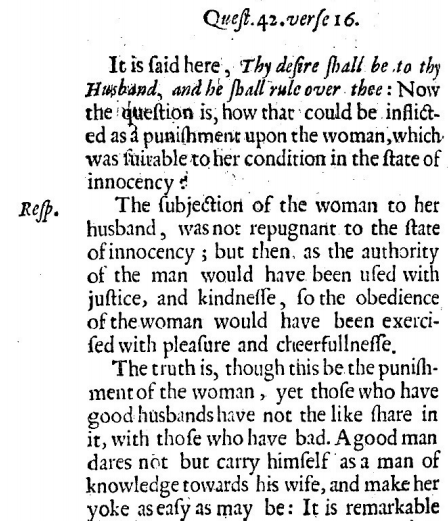 John White, A commentary upon the three first chapters of the first book of Moses called Genesis
London: Printed by John Streater, 1656.
Page 201 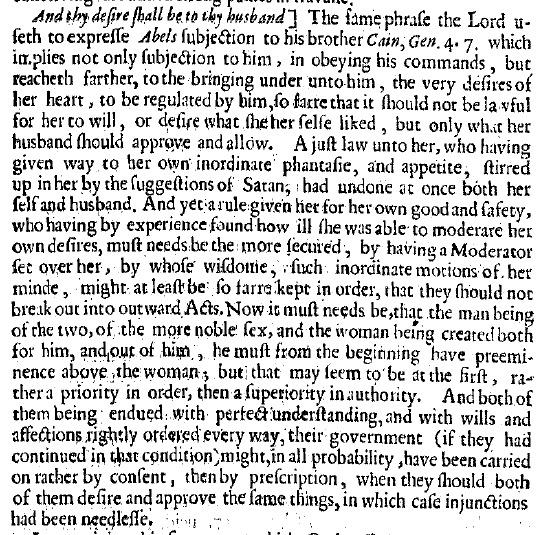